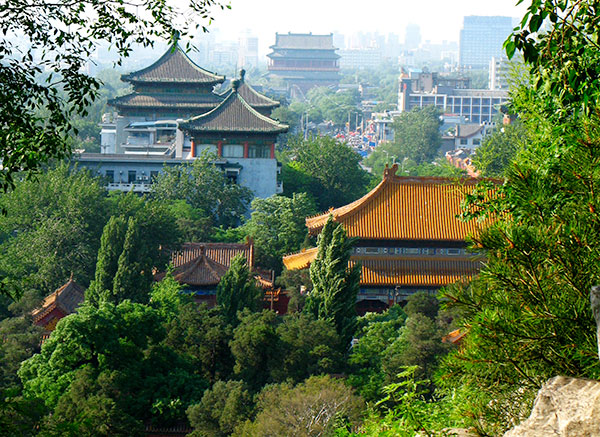 What do letters home from a 19th-century American boarding school, trade practices between China and Chile, and murals in southern Mexico have in common? They are the subjects of research carried out by three Notre Dame senior history majors pursuing honors theses through the History Honors Program.

Each project demonstrates the extraordinary opportunities afforded to Notre Dame undergraduates—and the impressive scholarship that motivated students can produce.

Last year, Sarah Murphy discovered a trove of letters in the Casey-Needham family correspondence in the Department of Rare Books & Special Collections at the Hesburgh Libraries. Written by two sisters enrolled at the Troy Female Seminary in the mid-1800s, the letters opened a world that Murphy was eager to explore. Most intriguing was the way the elder sister, Mary Casey, challenged the common perceptions of educated women in Victorian America.

Although graduates of Troy have been portrayed as bound to a domestic “women’s sphere,” Casey became an educator herself, starting new schools for young women in the South and the Hudson Valley. Working with Professor Semion Lyandres in the History Honors Methods course in the spring of her junior year—and with her adviser, Associate Professor Catherine Cangany—Murphy applied for an American Dream Grant through Notre Dame’s Institute for Scholarship in the Liberal Arts to conduct additional research in New England. She spent a week supplementing the research done at Notre Dame and is now preparing a 40- to 80-page thesis following the life of Mary and her younger sister, Louise. Murphy’s argument is that Troy actively prepared women for lives that extended the Victorian image of motherhood beyond the home. Her work with primary materials has been stimulating enough that Murphy is now actively considering applying to graduate programs in history.

For fellow history major Chen Gong, research this summer meant discovering a hidden part of his own country’s past. Gong received an Undergraduate Research Opportunity Program grant to travel back to his hometown, Beijing, and analyze documents housed at China’s National Library. Gong’s curiosity had initially been piqued in the Modern Latin America course taught by Jaime Pensado, the Carl E. Koch Associate Professor of History. There, he learned a history of Chile different than what he had been taught.

According to Gong, the Chinese government during its Cultural Revolution (1966-1976) was committed to portraying all Latin American nations—including Chile—as part of an emerging new alliance, one ideologically aligned with Maoist China. As Gong’s research reveals, when Chile’s government was overthrown in a military coup in 1973, Chinese newspapers stopped printing any information from the suddenly less hospitable country. With the noticeable absence of news, Chinese media maintained the narrative of third-world solidarity and China’s natural affinity with Latin America.

Trade continued between the two countries—despite China’s misrepresentation of the nations’ changed relationship. This incongruity has led to widespread misunderstanding, Gong argues. Chinese citizens still hold 1970s perceptions of alliances, and are therefore confused when Chilean, Mexican, and other Latin American countries do not automatically prefer Chinese trade partners to western alternatives. Like Murphy, Gong’s engagement with primary research has prompted him to continue his education; he is applying to graduate programs in global history.

Fellow senior history honors major Billy McMahon is not planning to become a professional historian, but his research this summer allowed him to see history unfold. McMahon traveled to southern Mexico to record the public art of the Zapatista movement, the leftist group that openly rebelled against the government in 1994 when the North American Free Trade Agreement (NAFTA) stripped Mexican laws of the land rights that, according to the Zapatistas, protected ordinary citizens.

Under the leadership of the charismatic Subcommandante Marcos—whose true identity has never been verified—the Zaptistas marched north from Chiapas toward Mexico City, claiming control of a scattered territory inhabited by nearly 250,000 people. Because no archives of the Zapatistas exist, McMahon had to travel into rebel-controlled land to photograph the murals that depict Zapatista ideology and to document what he could of the movement firsthand.

Finding financial support for his trip was difficult, given the danger involved, but McMahon secured funds through Notre Dame’s CUSE. Having been selected as a reporter for The Observer, he was also able to identify himself as a member of the press, allowing him to attend a press conference staged by the Zapatista leadership, where Marcos (now referred to as Galeano) was accompanied by a successor, an equally mysterious figure named Moises. Although those on the dais were all in uniform and wearing balaclavas (disguising their faces), McMahon was able to gauge a generational shift taking place among the group’s top brass.

Though beaten back by the Mexican government after an extraordinary initial campaign, the Zapatistas have remained a formidable power in much of the state of Chiapas for over two decades. With the rising of a new generation of leaders, there are questions about the direction and viability of the movement, but as McMahon’s research and reporting show, its ideology of indigenous rights against the encroachment of globalization remain strong.

McMahon continues to write for The Observer and remains interested in social activism and workers’ rights. Already involved in the North-Central Indiana Central Labor Council of the AFL-CIO, McMahon hopes to become a union organizer after graduation. For him, the study of history not only gives him insights into the history of political struggles and social movements, but also shapes his understanding of ways to organize for social change and communicate with a wider audience.

For all the seniors working on theses in their final semester at Notre Dame, the Department of History and other units of the university have provided opportunities for their particular passions and gifts to flourish. Whether it leads them into graduate programs or equips them for the wider world, their historical research has opened up new realms of discovery.