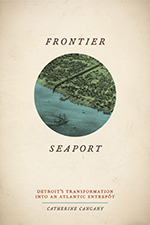 Today’s troubles notwithstanding, Detroit has experienced multiple periods of prosperity. In the late 18th century, the city was the center of the thriving fur trade. Its proximity to the West as well as its access to the Great Lakes and the St. Lawrence River positioned this new metropolis at the intersection of the fur-rich frontier and the Atlantic trade routes.

In Frontier Seaport, Cangany argues that as a result of the prosperous fur trade, Detroit functioned much like a coastal town, serving as a critical link in a commercial chain that stretched all the way to Russia and China—thus opening Detroit’s shores for eastern merchants. This influx of newcomers brought its own transatlantic networks and fed residents’ desires for popular culture and manufactured merchandise. Detroit began to be both a frontier town and seaport city—a mixed identity, Cangany argues, that hindered it from becoming a thoroughly “American” metropolis.

The University of Chicago Press, 2014

Our America: A Hispanic History of the United States 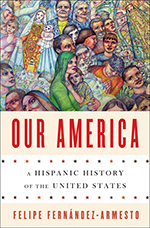 The United States is still typically conceived of as an offshoot of England, with our history unfolding east to west beginning with the first English settlers in Jamestown. This view overlooks the significance of America’s Hispanic past. With the profile of the United States increasingly Hispanic, the importance of recovering the Hispanic dimension to our national story has never been greater.

Fernández-Armesto begins with the explorers and conquistadores who planted Spain’s first colonies in Puerto Rico, Florida, and the Southwest. Missionaries and rancheros carry Spain’s expansive impulse into the late 18th century, settling California, mapping the American interior to the Rockies, and charting the Pacific coast. After Anglo-America expands west during the 19th century, a Hispanic resurgence follows. The peoples of Latin America overspread the continent, from the Hispanic heartland in the West to major cities such as Chicago, Miami, New York, and Boston. The United States clearly has a Hispanic present and future, and Our America illuminates its Hispanic past.

Contested Frontiers in the Syria-Lebanon-Israel Region: Cartography, Sovereignty, and Conflict 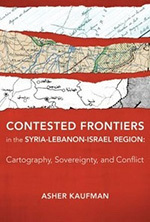 Contested Frontiers in the Syria-Lebanon-Israel Region studies one of the flash points of the Middle East since the 1960s—a tiny region of roughly 100 square kilometers where Syria, Lebanon, and Israel come together but where the borders have never been clearly marked. This was the scene of Palestinian guerrilla warfare in the 1960s and ’70s and of Hezbollah confrontations with Israel from 2000 to the 2006 war. At stake are rural villagers who live in one country but identify themselves as belonging to another, the source of the Jordan River, part of scenic and historically significant Mount Hermon, the conflict-prone Shebaa Farms, and a defunct oil pipeline.

Asher Kaufman uses French, British, American, and Israeli archives; Lebanese and Syrian primary sources and newspapers; interviews with borderland residents and with UN and U.S. officials; and a historic collection of maps. He analyzes the geopolitical causes of conflict and prospects for resolution, assesses implications of the impasse over economic zones, and reflects on the meaning of borders and frontiers today.

The Lost Art of Dress: The Women Who Once Made America Stylish 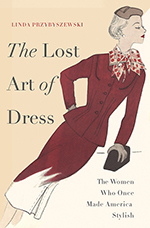 As a glance down any street in America reveals, American women have forgotten how to dress—chasing fads, choosing inappropriate materials and unattractive cuts, and wasting energy tottering in heels. Quite simply, women lack the fashion know-how needed to dress professionally and flatteringly.

As Przybyszewski reveals, it wasn’t always like this. In the first half of the 20th century, a remarkable group of women—the so-called Dress Doctors—taught American women how to dress well on a budget. Knowledge not money, they insisted, is the key to timeless fashion. The Dress Doctors offered advice on radio shows, at women’s clubs, and in magazines; millions of girls read their books in school and at 4-H clothing clubs. Their concerns weren’t purely superficial: they prized practicality and empowered women to design and make clothing. They championed skirts that would allow women to move freely and campaigned against impractical, painful shoes. The Lost Art of Dress introduces a new audience to the Dress Doctors’ timeless rules of fashion and beauty.

Related story: Historian Says Knowledge, Not Money, is the Key to Timeless Fashion

Philology: The Forgotten Origins of the Modern Humanities 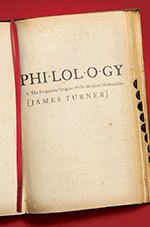 Many today do not recognize the word, but “philology” was for centuries nearly synonymous with humanistic intellectual life, encompassing all studies of language and literature, as well as religion, history, culture, art, archaeology, and more. How did it become little more than an archaic word? Philology tells the fascinating, forgotten story of how the study of languages and texts led to the modern humanities and the modern university.

Turner traces the development of humanistic learning from its beginning among ancient Greek scholars and rhetoricians to the English-speaking world of the 19th and early 20th centuries. Around 1800, he explains, the interlinked philological and antiquarian studies began to fragment into distinct academic fields. These fissures resulted in the new, independent “disciplines” that we now call the humanities. Yet the separation of these disciplines only obscured, rather than erased, their common features. The humanities today face a crisis of relevance, if not of meaning and purpose. Understanding their common origins—and what they still share—has never been more urgent.