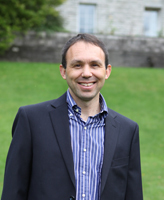 Associate Professor Daniel Hobbins’s arrival at the University of Notre Dame this fall will be a homecoming of sorts.

A cultural and intellectual historian of the late middle ages, Hobbins received his Ph.D. in medieval history from Notre Dame’s Medieval Institute in 2002 and completed a post-doctoral fellowship at the University in 2004.

Most recently an associate professor of history at The Ohio State University, Hobbins says his reasons for wanting to return to Notre Dame were both personal and professional. One of the most important factors, he says, is the University’s commitment to medieval studies.

“Notre Dame has a very, very strong program,” Hobbins says. “It’s a great place to be a medievalist.”

Hobbins specializes in the 14th and 15th centuries and has written books on Jean Gerson—a theologian and popular author of the early 15th century—and on Joan of Arc. In 2005, Harvard University Press published The Trial of Joan of Arc, his introduction to and translation of the original trial documents.

Hobbins’ next book, Authorship and Publicity Before Print: Jean Gerson and the Transformation of Late Medieval Learning (2009), looked at Gerson’s efforts to reach a wider public in an era before print. The volume won the American Philosophical Society’s 2010 Jacques Barzun Prize for the best book in cultural history.

“Monks writing in a scriptoria in a sleepy monastery—that’s the image most people have, if they have any image at all of the Middle Ages,” Hobbins says. “But it was a much more vibrant world, kind of like our own experience of going into an information society in the early 1990s with the Internet. For us and for them, the world was speeding up.”

In fall 2011, Hobbins received a Berlin Prize fellowship from the American Academy in Berlin, an honor he shared with Notre Dame medievalist John Van Engen, the Andrew V. Tackes Professor of History in the College of Arts and Letters.

“When we think of younger scholars, the words ‘promise and potential’ come to mind,” says Patrick Griffin, Madden-Hennebry Professor of History and chair of the Department of History in Notre Dame’s College of Arts and Letters. “Dan, however, has already achieved distinction in a field noted for its rigor and is, in fact, already a star in the making. We are thrilled to welcome such an accomplished scholar and master teacher to our ranks.”

At the University this fall, Hobbins will teach a course in the early Middle Ages and a class titled Unsolved Historical Mysteries, which he says will use case studies such as Joan of Arc and the trial of the Knights Templar as an introduction to historical methodology. He will also likely teach one graduate course each year.

Hobbins recently won a National Endowment for the Humanities fellowship, which he will be postponing while he teaches this academic year. The fellowship is for a project that looks at the origins of print from a medieval point of view—specifically, the growing demand in the late Middle Ages for writing and for technology that could produce manuscripts at a faster pace than scribal technology.

“It’s basically reversing the story,” Hobbins says. “In my story, print is not the cause of all this change; it’s the result of centuries of development and growth.”