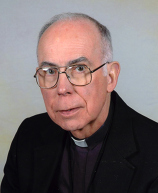 The honor comes as no surprise to colleagues and the students who have passed through his classroom over the last four decades. Blantz has long been recognized as an empathetic and outgoing scholar–priest who has genuinely lived his faith on campus.

An expert on the history of the New Deal and the history of the University of Notre Dame, Professor Blantz has lived in undergraduate residence halls for most of his teaching career. Five days a week, he celebrates Mass in McGlinn Hall, his home for the past 10 years. McGlinn students are also welcome to stop by Blantz’s living room, help themselves to the bowl of Kit Kats he always keeps on his coffee table, and talk about their lives or get counseling.

“I thoroughly enjoy what I’m doing now,” Blantz says. “I enjoy research, reading, and publishing–and by living in a student residence hall, I have contact with the students, which keeps me young.”

Blantz received his undergraduate degree from Notre Dame in 1957, before studying theology in Rome. He returned to South Bend to obtain his M.A. in U.S. History and completed his Ph.D. at Columbia University in 1968. During his long career at Notre Dame, he has served as university archivist, vice president for student affairs, and chair of the Department of History.

This year, Blantz teaches undergraduate courses that cover U.S. history from 1900 to 1945, and from 1945 to the present, and a research seminar on the history of Notre Dame. He says he is impressed that the sense of inquiry among students only grows as the admissions process becomes more and more competitive.

A Passion for Storytelling

Blantz enjoys reminding students that Notre Dame’s founder, Father Edward Frederick Sorin, started the University with just six Brothers of Holy Cross in 1842 during a period in which Catholics were a minority.

“Although he was born in France, Father Sorin wanted very much for people to know he was an American,” Blantz says. “He opened the school to work with the French–speaking Catholics and the Potawatomi Indians, but he pointedly held the first end–of–year ceremony in 1845 on the Fourth of July.”

Blantz also draws parallels for students between President Franklin Roosevelt’s efforts to end the Great Depression and current efforts by Barack Obama to pull the country out of its economic downturn.

“Of course, I’m an optimist to start out with, but I think we’ll pull out of this one, too,” Blantz says.

A Teacher for All Generations

Blantz, who joined the Notre Dame faculty in 1968, has repeatedly been honored for his teaching. In 1974, he won a Thomas Madden Award for Excellence in Freshmen Teaching, and in 1979 he won the Sheedy Excellence in Teaching Award, which is presented annually to an outstanding teacher in the College of Arts and Letters. In 2001, Blantz won a John A. Kaneb Award for undergraduate teaching. Kaneb Awards were a previous incarnation of the current Joyce Awards.

According to Vice President and Associate Provost Dennis C. Jacobs, who oversaw the award’s name change and reduction in the number of annual winners, funding for the program was established through an endowment from admirers of Father Edmund Joyce, a former University vice president.

Students or faculty members can nominate an extraordinary instructor for a Joyce Award. The award winners are chosen from among the nominees by faculty within seven segments of the university, including business, engineering, fine arts and architecture, humanities, language and literature, science, and social sciences. Selection committees within each area review and recommend nominees.

The winners, Jacobs says, “are highly dedicated to undergraduates, often make themselves available outside the classroom—and always show a deep commitment to the learning, well–being and intellectual development of the students.”