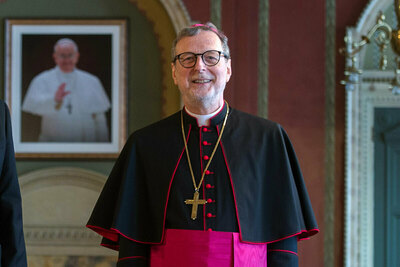 Due to His Excellency's attendance at the State funeral for Her Majesty Queen Elizabeth II, this lecture will now be online only.

His Excellency, The Most Reverend Claudio Gugerotti, the Apostolic Nuncio to Great Britain and the Titular Archbishop of Rebellum, will present the Keeley Vatican Lecture online on Wednesday, September 21, 2022, at 12:30 p.m.

This lecture, entitled “My Contacts with Saint John Paul II at the Fall of the Soviet Union,” will be live streamed on this event page as well as the Nanovic Institute's YouTube channel.

Submit your Question for the post-lecture Q&A session

Claudio Gugerotti was born in Verona, Italy, in 1955 and ordained a priest of the Diocese of Verona in 1982. He studied Eastern Languages and Sacred Liturgy and was a professor of Patristics, Eastern Liturgy at the Institute of Ecumenical Studies in Verona from 1981 to 1985.

In 1985, he was appointed as an official working at the Congregation for the Eastern Churches and he became its Undersecretary in 1997. He has also taught at the Pontifical Oriental Institute.

He received his episcopal consecration by Pope St John Paul on 6 January 2002 appointing him to the Titular See of Rebellum (Ravello is the Italian title).

Generously supported by Terrence R. Keeley '81, the lecture is now in its second decade. It provides a way for the Nanovic Institute to deepen Notre Dame’s connection to the Holy See by bringing distinguished representatives from the Vatican to Notre Dame to explore questions involving Notre Dame’s Catholic mission. Each year’s lecturer is chosen by the Institute in close consultation with its Advisory Board and the Notre Dame administration. View the archive for the complete archive of past Keeley Vatican Lectures.