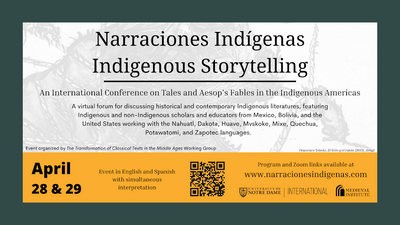 The anonymous Nahua translators of Aesop's Fables are not the only ones who have transformed Aesop into an Indigenous sage. In recent decades, Indigenous and Native American writers, educators, and scholars throughout the Americas have written and published short stories, including translations of Aesop's Fables or texts influenced by them, to promote the cultivation of Indigenous literatures and the preservation of their languages, from Nahuatl to Dakota. In their work, it is not the Greco-Latin Aesop who talks as if simply donning an Indigenous guise. Instead, each act of writing and translation is an occasion for transforming Aesop and his Fables into true vehicles of Indigenous values and worldviews.

The International Conference "Indigenous Storytelling", taking place on April 28 & 29, will be a meeting place for Indigenous and non-Indigenous educators and scholars working with Indigenous languages from Mexico, Bolivia, and the United States to share their educational and literary experiences, as well as to present to the interested public the current state of literatures in some Indigenous languages.

Everyone is welcome to listen to our speakers and ask them questions! No registration required! Schedule and public Zoom links are available at www.narracionesindigenas.com.