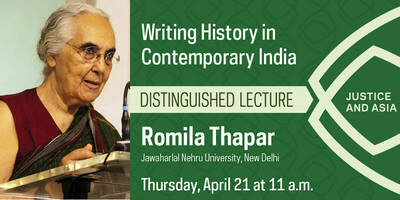 Pre-eminent historian and public intellectual Romila Thapar will deliver the second annual Justice and Asia Distinguished Lecture by the Liu Institute for Asia and Asian Studies at the University of Notre Dame on Thursday, April 21, 2022.

The virtual event will take place through Zoom at 11 a.m. Easter Daylight Time/8:30 p.m. India Standard Time. It is free and open to the public with registration. Read the media release about the event.

In a lecture titled “Writing History in Contemporary India,” Thapar will examine academic freedom in India, especially the divide between the academic writing of history and public perception. Drawing upon examples from various periods of Indian history, her lecture will discuss how history is used in political ideology.

Thapar is an emerita professor of ancient history at Jawaharlal Nehru University in New Delhi. Her principal area of study is ancient India, and she is regarded for her use of social-historical methods to understand change in the mid-first millennium BCE in northern India. She is an honorary fellow of SOAS University of London, where she received her Ph.D. in 1958, and a foreign honorary member of the American Academy of Arts and Sciences. In 2008, Thapar received the U.S. Library of Congress’s Kluge Prize for Lifetime Achievement in the Humanities and Social Sciences.

At 90 years old, she remains an active scholar, lecturer, and public intellectual.

The Justice and Asia Distinguished Lecture invites top scholars who examine the theme of justice in relation to Asia and with awareness of Asian cultures and traditions. The series is part of the Liu Institute’s organizing theme of “Justice and Asia” that examines and supports thematic work from a range of perspectives, projects, disciplines, and collaborations. The Justice and Asia Distinguished Lecture series launched in 2021 in an event with Professor Haiyan Lee of Stanford University.