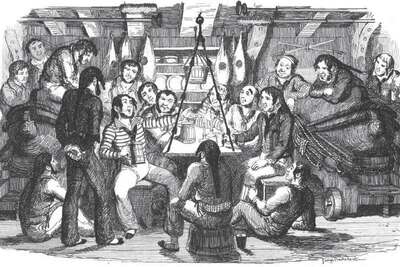 "From Sea Shanties to Lockdown Podcasts: Notes from the 4th Wave of the Ballad Revival"

At the end of 2020, Nathan Evans, a 26-year old Scottish postman, became a social media sensation by posting a Tik-Tok video of himself singing a Sea Shanty “Soon May the Wellerman Come”.  Over the next year the song became probably the most listened to traditional song of all time, watched millions of times on the original Tik-Tok platform, and in countless other venues, including propelling professional recordings of the same song, by groups like The Longest Johns up the music charts. This talk considers the phenomenon of Shanty-Tok in the context of a wider pattern of interest in traditional song, made possible by new media forms, and argues that we are in the midst of the 4th wave of the ballad revival, a revival that promises to eclipse that of the 1960s.

The event is free and open to the public.

Ian Newman, associate professor of English and Nanovic faculty fellow at the University of Notre Dame, works on literature, song, politics, aesthetics, and urban space across the eighteenth and nineteenth century in Britain and Ireland. He is the author of the book The Romantic Tavern: Literature and Conviviality in the Age of Revolution (Cambridge University Press, 2019), which examines the culture of conviviality that emerged in the second half of the eighteenth-century forming a crucial second phase to the polite public sphere—one marked by intense examination of the relationships between public and private space, self and community, seriousness and pleasure. He is also the co-editor, with Oskar Cox Jensen and David Kennerley of Charles Dibdin & Late Georgian Culture (Oxford University Press, 2018), a collection of essays examining the varied career and legacy of the theater impresario, popular song writer, and author Charles Dibdin. He was the guest editor of a special issue of Studies In Romanticism on "Song and the City" (Winter 2019), to which he also contributed an introduction co-written with Gillian Russell.

He has been a visiting scholar in the music department at King’s College London for the project “Music in London 1800-1851,” and a resident associate at the National Humanities Center. He has been a frequent contributor to the research group Sociabilités/Sociability du long dix-huitième siècle (1650-1850) and is a board member of the Nineteenth-century Experimental Song Collective. He is the author of the online project www.1790salehouse.com,  and is a founding editor of the Keats Letters Project.  He currently serves as the reviews editor for Studies In Romanticism. His recent research focuses on the relationship between popular song, theatre song, and ballads, and their transmission and circulation across the eighteenth- and nineteenth-centuries. He is  currently editing Charles Macklin and the Practice of Enlightenment for Liverpool University Press (forthcoming in 2020) with David O'Shaughnessy, and is working on a book project Song Stories: The Ballad and Its Narrators.