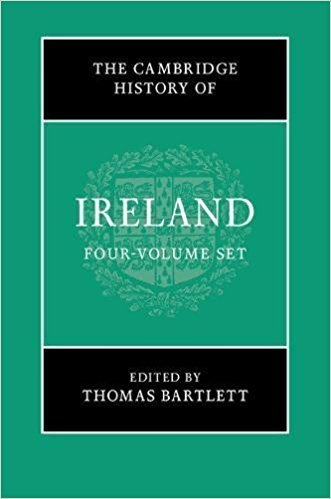 Patrick Griffin, Madden-Hennebry Professor of History and Director, Keough-Naughton Institute for Irish Studies, wrote a chapter titled, "‘Irish’ Migration to America in the Eighteenth Century? Or the Strange Case for the ‘Scots/Irish,’" in volume III.

Brian Ó Conchubhair, associate professor of Irish language and literature and director of the Center for the Study of Languages and Cultures at Notre Dame, wrote an article titled, "The Culture Wars: The Gaelic League and Irish-Ireland," in volume IV.

The Keough-Naughton Institute for Irish Studies has joined with Cambridge University Press and the Trinity Long Room Hub to sponsor a seminar on Monday (April 30) and then a celebration at Dublin Castle in the evening, with President Michael D. Higgins offering a special address.

The work benefits from a strong political narrative framework, and is distinctive in including essays that address the full range of social, economic, religious, linguistic, military, cultural, artistic and gender history, and in challenging traditional chronological boundaries in a manner that offers new perspectives and insights.

Each volume examines Ireland’s development within a distinct period, and offers a complete and rounded picture of Irish life, while remaining sensitive to the Irish experience.

The first volume of "The Cambridge History of Ireland" presents the latest thinking on key aspects of the medieval Irish experience, focusing on the extent to which developments were unique to Ireland. The openness of Ireland to outside influences, and its capacity to influence the world beyond its shores, are recurring themes. Underpinning the book is a comparative, outward-looking approach that sees Ireland as an integral but exceptional component of medieval Christian Europe.

Volume II looks at the transformative and tumultuous years between 1550 and 1730, offering fresh perspectives on the political, military, religious, social, cultural, intellectual, economic and environmental history of early modern Ireland. As with all the volumes in the series, contributors here situate their discussions in global and comparative contexts.

The 18th and 19th centuries were an era of continuity as well as change. Though properly portrayed as the era of "Protestant Ascendancy," it embraces two phases – the 18th century, when that ascendancy was at its peak; and the 19th century, when the Protestant elite sustained a determined rear-guard defense in the face of the emergence of modern Catholic nationalism. This volume moves beyond the familiar political narrative to engage with the economy, society, population, emigration, religion, language, state formation, culture, art and architecture, and the Irish abroad

The final volume covers the period from the 1880s to the present. This insightful interpretation on the emergence and development of Ireland during these often turbulent decades is copiously illustrated, with special features on images of the "Troubles" and on Irish art and sculpture in the 20th century.

At the celebration in Dublin Castle, President Michael D. Higgins commented on the impressive scholarship contained in the four volumes. He highlighted just a few chapters—one of which was the contribution of Patrick Griffin:

The character of this eighteenth-century migration from Ireland of perhaps up to 250,000 people has been cemented in the popular mind through the use of the term of ‘Scots Irish’, which, as Professor Patrick Griffin’s contribution demonstrates, was itself a nineteenth-century appellation rather than one which might be familiar to the migrants themselves, indicating not only the fluid character of migration within these islands and the New World Colonies, but also something of the ideological environment in which ethnic categories were later constructed and mobilised.

The re-interpretation of the nature of this wave of Irish migration, and I use the term ‘Irish’ deliberately, is important not only for our own historiography but for historical debates within the United States, where the immigration that followed An Gorta Mór is very often thought of as, in an excessively exclusive way, the foundational event in Irish-America, and of what we have come to know as ‘the Irish diaspora’, a term that encompasses all those who claim Irish ancestry today, with all the diversity and complexity that implies.

Originally published by Mary Hendriksen at irishstudies.nd.edu on April 30.