When history professors Karen Graubart and Jaime Pensado saw what the Art Institute of Chicago was showing this season, they planned a road trip and invited their students to come along.
As a result, more than two dozen undergraduates—along with the two professors and their TAs—headed to downtown Chicago in September to see “What May Come: the Taller de Grafica Popular and the Mexican Political Print,” an exhibit of works from what 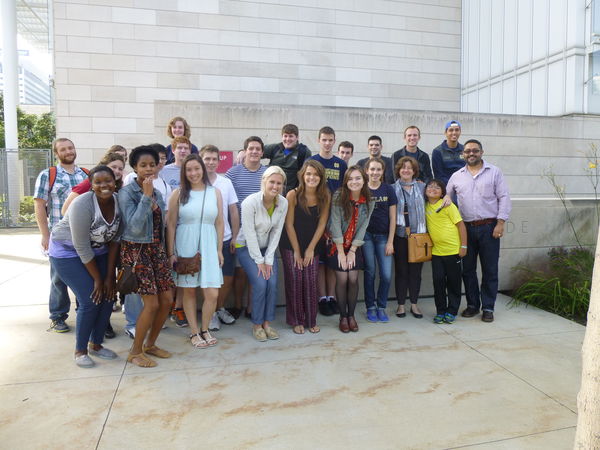 the Art Institute describes as the “most influential and enduring printmaking collective” of the early twentieth century.
A state-sponsored studio in Mexico City, the Taller de Grafica Popular (TGP) produced leftist prints that advanced the government’s antifascist rhetoric during the Second World War. Founded by Leopoldo Mendez, Luis Arenal, and Pablo O’Higgins in 1937, the TGP produced thousands of works through the 1950s by dozens of Mexican and international artists.
The exhibit features more than a hundred pieces from the Art Institute’s vast TGP collection. It is a draw in its own right, but was of particular interest to the first-years students enrolled in Graubart’s University Seminar as well as upper-level students in Pensado’s course, Art and Revolution in Latin America. 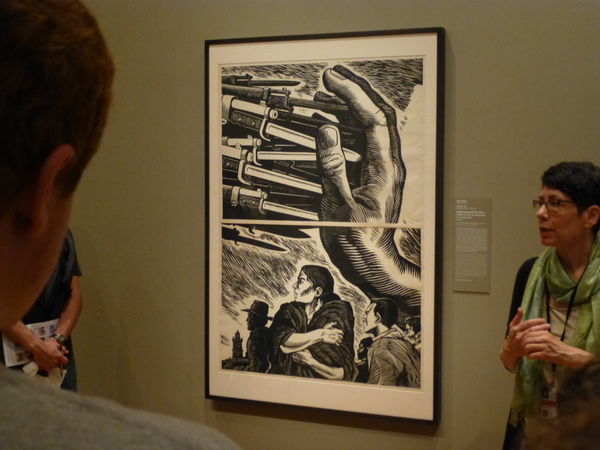 Graubart’s class is reading Gabriel Garcia Marquez’s One Hundred Years of Solitude, using the art, literature and history of the time to make sense of its many layers of meaning. A masterpiece of 20th century literature, One Hundred Years of Solitude depicts utopian aspirations within a fictionalized Columbia. The students who visited the TGP exhibition saw contemporary depictions of Mexican idealism and thereby gained insights on wider themes of revolutionary Latin America. “I found the contrasts between the propaganda from the Mexican Civil War and Gabriel Garcia Marquez's account of Macondo from One Hundred Years of Solitude to be particularly interesting,” said John Speier, a freshman in Graubart’s University Seminar. Classmate Juliana Vidales added that being able to view the exhibit “solidified the feeling that what we talk about in class is real and important.”
The relevance of the exhibit was perhaps even greater for students in Pensado’s Art and Revolution in Latin America. The course examines the
Mexican and Cuban Revolutions through the popular art of the time. “We’ll actually see what we’re studying,” Pensado explained in anticipation of the trip, noting that studying this period’s graphic art can provide access to complicated subjects such as fascism, Stalinism, and nationalism.
Prints likes as those produced by the TGP were highly valued tools of state-sponsored propaganda. The TGP not only aimed to articulate the ideals of the Mexican Revolution for its own citizenry, but to actively combat the spread of fascism by visually reinforcing leftist ideology. Because of TGP’s international scope, Pensado’s and Graubart’s students gained an understanding not only of Mexico during the presidency of Lázaro Cárdenas, but of contemporary developments in fascist Spain, communist Russia, and Nazi Germany. Senior Sara Quashnie found it “extremely interesting to see works that commented on not only Mexican affairs of the period but also political matters from around the globe.”
For Cameron Kupfer, a senior majoring in mechanical engineering, a particular area of interest was the workshop’s 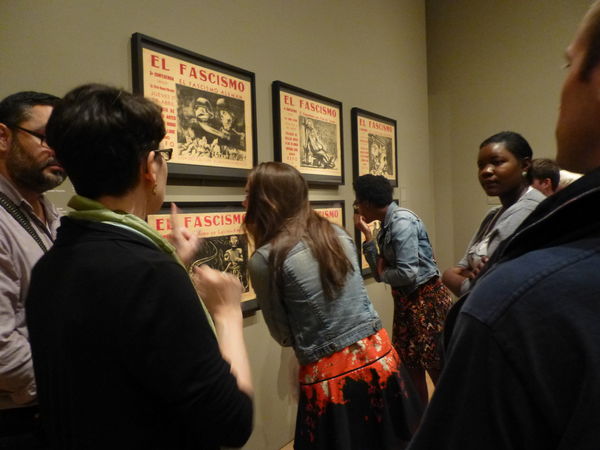 connection to the United States. A direct link lay with the American-born founder of the TGP, Pablo O’Higgins. But as “What May Come” demonstrates, the TGP artists saw the Allied nations as an important audience for their work. Kupfer was pleased to learn more about the TGP’s “relationship with American artists who were influenced by the Grafica Popular movement.”
Both Pensado and Graubart emphasize the value of extending the classroom into the real world. Graubart argues that especially with University Seminars it is good to show how “history works off campus” and away from textbooks. Quashnie’s new appreciation for “the different techniques the artists used” reminds historians of the importance of familiarity with material sources. As she reported, the students were able to view “pictures created by linocut, which involved carving the design into a wood block.” Seeing such artifacts first-hand trumps reading about them, in that the ingenuity and craftsmanship are immediately apparent—sparking new questions about how and why these techniques were favored.
In addition to being a perfect complement to their courses, the trip allowed the first-years and upper-level students to embody the Notre Dame community away from South Bend, and to enjoy Chicago together on a beautiful September day. The group had an hour with the curator for the exhibition, Diane Miliotes, and then had time to study the works in detail on their own. Many took advantage of the opportunity to visit other collections on display at one of the world’s foremost art museums.  “I truly enjoyed seeing the unique and famous paintings ‘Paris: A Rainy Day,’ and ‘A Sunday Afternoon on the Island of La Grand Jotte,’” Speier volunteered.
The group traveled together by bus, and is grateful to the College of Arts and Letters for its 'Teaching Beyond the Classroom' grant, and to the Latin American Studies program for co-sponsoring the trip.
- Alexander Wimberly, Dept. of History