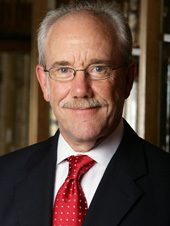 In 2011, University of Notre Dame Professor Thomas F.X. Noble received the prestigious Otto Gründler Book Prize in medieval studies, a National Endowment for the Humanities fellowship, and the Sheedy Award—the highest teaching honor in the College of Arts and Letters.

Noble, who spent all of his 11 years at Notre Dame as either director of the Medieval Institute or chair of the Department of History, says this rare confluence of honors means so much to him precisely because it is an opportunity to demonstrate that high quality teaching, scholarship, and university service need not be mutually exclusive.

“I had quite an unusual year,” he says, “but it’s been a good year for the entire Department of History, and I think that’s exactly what we want to see around here.

“If you look across the department, you’ll see many people who have won teaching awards and scholarly recognition, which I think simply makes the case that it doesn’t have to be one thing or the other.”

As a teacher, Noble says he seeks first to learn about his students—who they are, where they are coming from, and why they are taking that particular course.

“People ask me what I teach,” Noble says. “I always say it’s not a what it’s a who. I teach students. History is the language I speak in my classroom but I’m teaching students. And I’m not teaching some theoretical classroom of students, I’m teaching these kids right here, right now.”

Having taught more than 7,000 undergraduates and trained 14 Ph.D. recipients in his 36-year career, Noble says this approach is just as important when shepherding the next generation of academics out to the frontiers of one’s field as it is in broad, introductory courses such as Western Civilization to 1500 and World of the Middle Ages.

Genuine enthusiasm is also a key to Noble’s teaching.

“I’m sort of infinitely curious about everything within the humanities,” Noble says. “I love learning all kinds of things and looking for connections among things, and as soon as I learn something, I’m just busting out with energy to go tell somebody—students, for instance.”

As a scholar, Noble specializes in the early medieval era, late antiquity, the papacy, and the city of Rome. He won the 2011 Gründler prize for Images, Iconoclasm, and the Carolingians, which explores controversies over religious art. His current NEH-funded project, Rome in the Medieval Imagination, will analyze how writers from Constantine to Petrarch talked about the legendary city.

While teaching is a way for any professor to share his or her passion and expertise in a particular subject, Noble says, it is not simply a one-way street.

“In the classroom, you have a group of students who are bright, interested people, but they are not your fellow specialists or professional colleagues,” he says. “You have to make clear to them whatever it is you’re trying to communicate. You’ve got to make it make sense, and that challenge has helped me enormously in my writing over the years.”

In that way, Noble says, his students have taught him how to make his research more accessible to an audience beyond the world of academia.

“When I write, I’d like for pretty much anybody to be able to read it and see what I meant,” he says, “so that’s another way that, in my view, teaching and scholarship actually support each other.”

Noble is also known for his commitment to service—to the Department of History, the College of Arts and Letters, the University, and outside professional associations such as the American Catholic Historical Association, which elected him to serve as its president for 2012.

These activities, he says, can both benefit from and support a faculty member’s work as a teacher and scholar. “We always talk about teaching and research, but in a sense there’s a kind of third leg of the stool and that is service,” he says.

In announcing the 2011 Sheedy Excellence in Teaching Award, Associate Dean for Undergraduate Studies Jo Ann DellaNeva noted that Noble is “deeply committed to the intellectual life of the College and the concept of teaching beyond the classroom.”

“His recent administrative duties have given him the opportunity to have a lasting impact on the way history—and, in particular, medieval history—is taught at Notre Dame,” she says.

Noble also shares his knowledge and teaching talent with Notre Dame alumni clubs across the country through Hesburgh Lecture Series and Universal Notre Dame Celebrations talks. “The connection people have to Notre Dame is just unbelievable, and I really thrive on that,” he says. “But also, these are people who are incredibly generous to the University and it is a chance to say, ‘Thank you—we can’t do what we do without you, and you need to hear that.’”

In the end, his service, teaching, and scholarly work all stem from the same desire to learn and share knowledge, Noble says. “There’s a wonderful line attributed to the Roman philosopher Seneca, which is, ‘I take no delight in knowing anything if I alone am to know it.’”