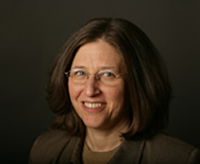 Associate Professor Gail Bederman is the latest faculty member in Notre Dame’s Department of History to accept a prestigious invitation to the Institute for Advanced Studies in Princeton, New Jersey.

One of the world’s leading centers for theoretical research and intellectual inquiry, the IAS collaborates closely with nearby Princeton University but is not formally affiliated with any educational institution.

Beginning in September 2011, Bederman will take a year off from her duties at the University to devote herself full-time to research and writing as an IAS member. Only about 190 scholars are chosen each year for membership at the institute; more than 1,500 typically apply.

In the same halls once walked by distinguished IAS faculty like Albert Einstein, George Kennan, and Robert Oppenheimer, Bederman will finalize research that she hopes will shed light on an ongoing confrontation of historic proportions in the United States—the clash over abortion.

Bederman’s focus is the intellectual roots of this persistent debate.

“If Martians came from outer space and landed on earth, they would probably be surprised to discover people were arguing over whether the pregnant woman or her unborn child were the primary ‘independent property owning individuals’ and whose claim was superior to the other’s,” she says. “It is an odd way to talk about human interconnectedness.”

Bederman has been able to unearth some little-known connections, literally hidden in the margins, between the modern moral clash over abortion and previous intellectual disputes of the 17th and 18th centuries.

To most Americans today, it seems logical—even inevitable—to frame this moral and intellectual conflict in terms of competing property rights, derived out of the 17th-century political philosophy of John Locke. Bederman says following that intellectual template leads to an inevitably bitter fight over individual human rights—the child, to life; or the mother, to liberty—that has quagmired the issue since abortion was legalized in 1973.

Bederman says her research is about “going back in history to find out how that happened.”

Back to the Future

She begins by asking how inevitable it was that this conflict is framed by the competing rights of individuals and develops a new understanding of the conflict by way of Thomas Malthus.

In Malthus’ attempts to tamp down the advance of the radically egalitarian philosophies of political philosophers Mary Wollstonecraft and her husband, William Godwin, Bederman finds some of the origins of the contemporary cultural stalemate.

After examining Mathus’ “marginalia,” the running commentary he jotted in the page margins of Godwin’s and Wollstonecraft’s writing, Bederman comes to the surprising conclusion that Malthus was initially inspired to compose his famous treatise on the inexorability of overpopulation as a satiric counter to Godwin and Wollstonecraft’s beliefs.

Bederman locates the roots for various modern efforts to contain population, curtail welfare payments, and “privatize” childrearing within Malthus’ gloomy assessments of the threat of overpopulation and the undue burden he believed poor children placed on the nation’s taxpayers.

As a counterpoint, she perceives in Godwin and Wollstonecraft’s efforts to relieve 18th-century women of their subjugation to the will of their husbands an attempt to promote societal openness to childrearing as a mutually enriching responsibility best shared by community and parents.

From the intellectual threads of this famous discourse, Bederman will use her year at the institute to weave a connection to contemporary assumptions over rights and responsibilities that are, ironically, often used by both sides of the abortion debate.

Her research will no doubt cause some controversy, but it may also promote a rethinking of the roles of both individuals and society in welcoming and nurturing every child.

Bederman acknowledges that her work may only “restate”—not resolve—the problem of abortion in society. “But it seems to me from studying Catholic Social Teaching that seeing society as a collection of ‘independent property owning individuals’ works for some things but is absolutely fallacious for others.”

The limits of that deeply embedded belief have made it difficult, she suspects, for Americans to fully embrace, much less create practical socio-political expressions of, Catholic Christian notions of the interconnectedness of all people.

“Both sides of the abortion dispute,” says Bederman—those who absolutely prioritize individual rights of the mother and those who support the right to life of unborn children but strive to reduce community obligations in childrearing—“have essentially bought into Malthus.

“And if we can’t find some way to understand that we’re all interconnected,” she says, “that’s where we’ll be stuck.”