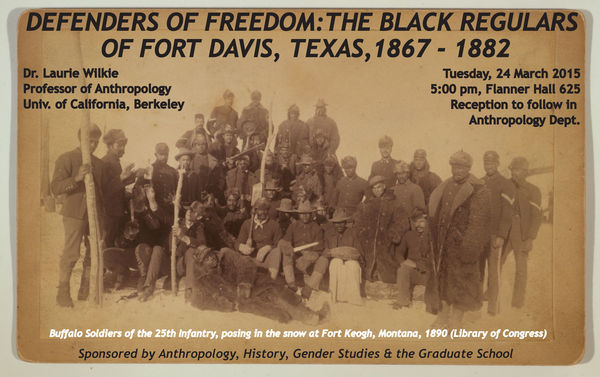 Following the Civil War, free and enslaved African-American men demonstrated their willingness to fight and die for freedom. In the downsizing of the military following the end of the war, the federal government recognized the need to allow these newly enfranchised men and their brethren to continue to serve in the US military. The western frontier and the escalating “Indian Wars” led Congress to exclusively station black troops west of the Mississippi. Fort Davis, located in West Texas, initially settled to protect the Butterfield stage line, was exclusively manned by black troops and their white commanding officers from 1867 to 1882, and today is preserved as a National Park Site.

Despite an interpretive program that includes a heavy emphasis on the presence of Buffalo soldiers, particularly Henry Flipper, the first black graduate of West Point, no social history nor archaeological study of the men who lived at Fort Davis has been conducted.  In this presentation, Dr. Laurie Wilkie will discuss broadly the space that black regulars collectively held in the public imagination of the 19th and early 20th centuries, their contributions to notions of Diasporic identity in the US and beyond, and explore why there has been no sustained archaeological study of these soldiers. She will then turn her attention to archaeological materials recovered from Fort Davis during trenching in 2009, and what these items have to say about the ways the men of Fort Davis saw themselves as on the frontier of reconstructing the nation’s understandings of Black manhood.